At the most recent AIAS Board Special Call, the 2019-2020 Board of Directors voted to appoint the incoming Ambassadors for the Latin America and Middle East Regions. After much deliberation, and while assisted by the Council of Global Representatives, the Board appointed Gaëlle Bazergi from the Holy Spirit University of Kaslik (USEK) in Lebanon as the next Middle East Ambassador and Fernando Olmedo Rivera from the University of Texas Arlington as the next Latin American Ambassador. Both members were chosen for their passion for their regions as well as their ability and willingness to bridge the gap between the National Office and our International Chapters!

International Ambassadors are much like Quad Directors in their roles, although there are currently less than 20 International AIAS Chapters across all regions. At this time, Ambassadors are not voting members on the Board, but are relied on heavily to provide input about global initiatives and to represent our members and their needs. International Ambassadors help the AIAS fulfill our promise to advance leadership, design, and service among ALL architecture students, and our outgoing Ambassadors have contributed to that effort immensely: Yuliane Thillet served one and a half terms as AIAS Latin America Ambassador, and Sandi Boutros served over two terms as AIAS Middle East Ambassador. 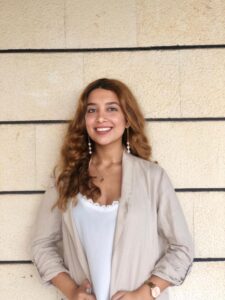 Gaëlle Bazergi has just completed her term as AIAS Chapter President at USEK where she is in the process of earning her Master’s degree. Her involvement in the AIAS stems from a strong belief in the humanitarian foundation of architecture, and her extracurricular activities include supporting activities for a cause, like walks, exhibitions, and events. Gaelle may speak five languages (Arabic, English, French, and Italian), but she still holds the Middle East Region very close to her heart. We asked Gaelle what inspired her to study architecture and she said:

“I was raised in a home where art was always a very important subject. Growing up, I’ve spent a lot of time watching my father paint, and for me that was very inspirational. I have always known I was going to pick a creative field, and architecture was always at the back of my head. Later, as I was a bit older I noticed that I always had something to say about spaces and buildings around me; the feelings they evoke, how political and impactful they are in nature, etc. and this is what really pushed me into going to architecture school.” 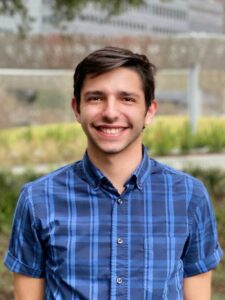 Fernando Olmedo Rivera recently graduated from the University of Texas at Arlington with his Bachelor of Science in Architecture degree and will be attending the University of Texas at Austin this fall. Before graduating, he played a major role in his AIAS Chapter as one of the leaders of CAMP – UTA’s mentorship program. Fernando is really excited to be the Ambassador for Latin America and looks forward to learning about the different cultures, conversing with fellow Spanish-speaking members, and learning about his own Mexican culture. We asked Fernando to tell us more about his background and architectural inspiration:

“I lived in Mexico for the first 10 years of my life. I was born in Mexico City, then my family moved to Durango, and then Guadalajara where I lived most of my time in Mexico. At 10 years old, my family and I moved to Fort Worth, Texas where my dad got a job as an elementary school teacher. I’ve been living in this area since then. Living here has influenced me as an architecture student because this city is so different from the cities I lived in Mexico. Coming from Mexico where cities are dense and walking is a main form of transportation, to then living in the Dallas Fort Worth Metroplex where mostly the only form of transportation is a car. This and many other contrasting experiences of where I have lived has made me think a lot about how urbanism and architecture can make a big difference in how people live their lives and what people can and cannot do. As I am influenced by my past experiences, I have also learned a lot through my architecture education, and I plan to keep learning.”

The Ambassadors will be inducted at the Inauguration of the 2020-2021 AIAS Board of Directors at our annual Grassroots Leadership Conference in just a couple weeks. Looking to introduce yourself and get acquainted? You can reach them at any time at latinamerica@aias.org and middleeast@aias.org.