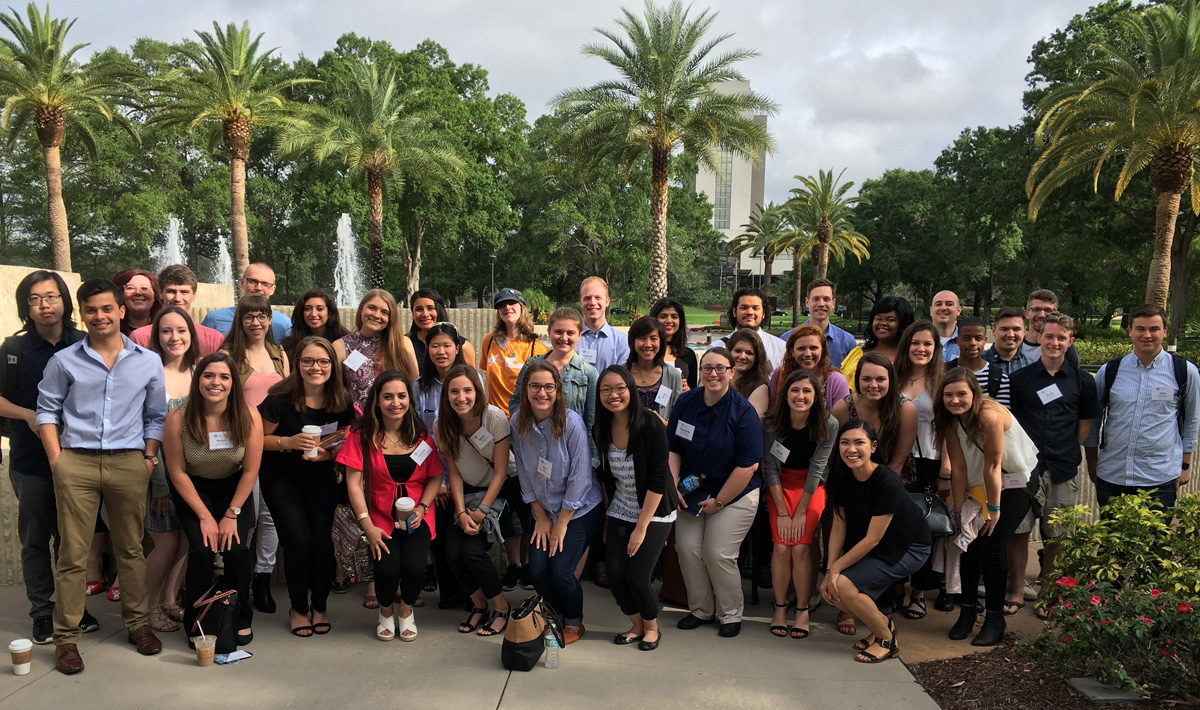 A special thanks to our event sponsor the Savannah College of Art and Design.

To mark its sixtieth anniversary, AIAS convened the conference AIAS Imagine: Top 60-at-60. The event was co-hosted with the Disney Imagineering division near Disney World from May 19-21, 2017. At the conference, sixty of the top members in AIAS, the finalists of a competitive application process, met to imagine the future of AIAS.

The Imagineers helped push the attendees’ imaginations throughout the planning process. The designers of Disney’s immersive experiences, from theme parks to cruise ships, the Imagineers revealed the secrets behind making the wonderful world of Disney a reality. Inspired by the Imagineers, attendees crafted several possible visions for the future of AIAS and considered ways to make those ambitious dreams come true.

This type of event is a first for AIAS. The organization never holds public planning sessions. Furthermore, it rarely holds national events on such a small scale or with such a big corporate partner.

To chart the future of AIAS, the board felt it was important to open planning sessions to members. As a result, the board heard ideas that they had never considered. For example, President of AIAS Sarah Wahlgren said, “I really was blown away by the idea of bringing architecture into elementary schools,” referring to an exercise where groups created collages of utopian societies, many of which incorporated design thinking into general education. 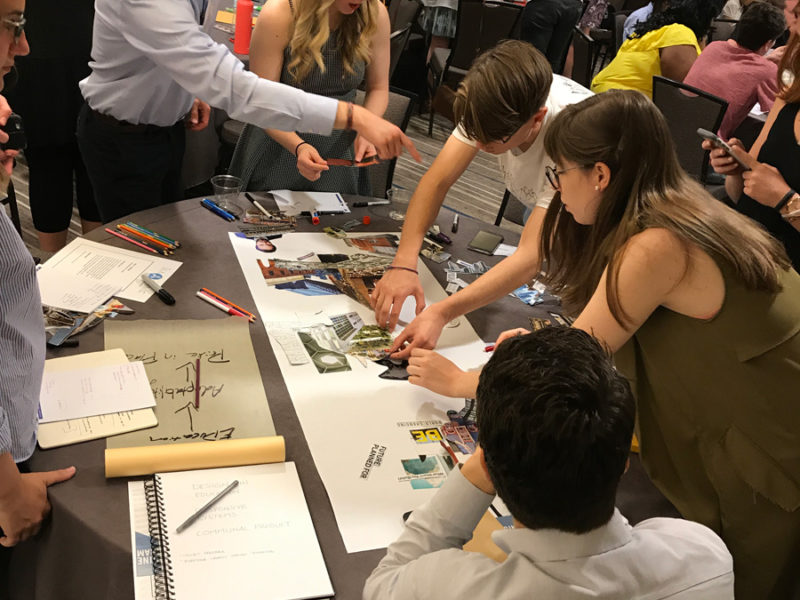 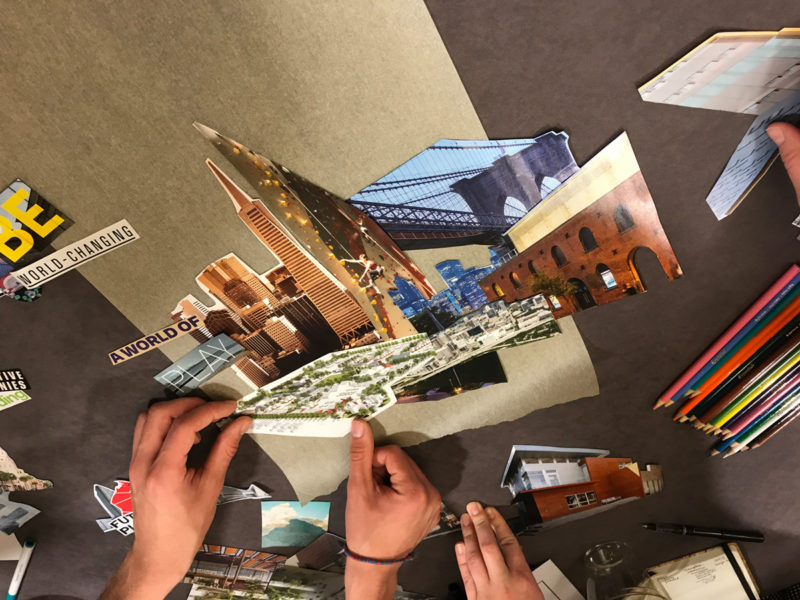 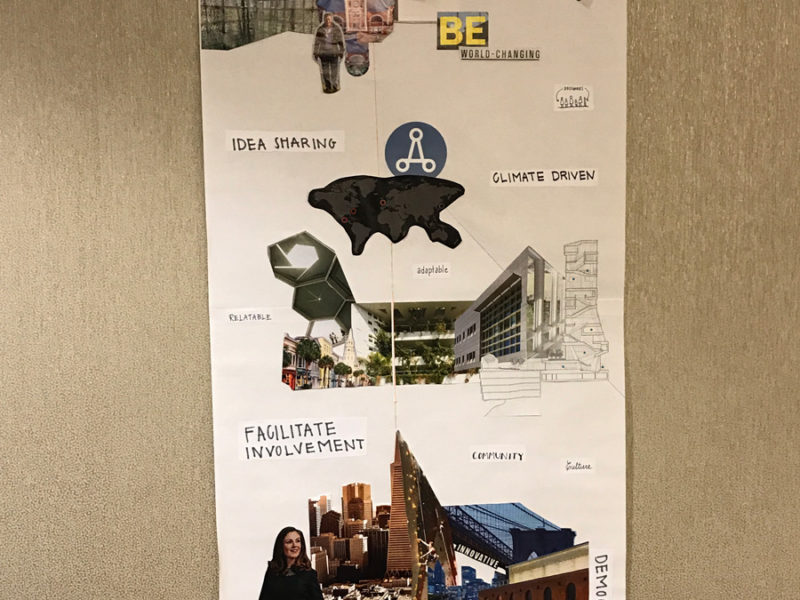 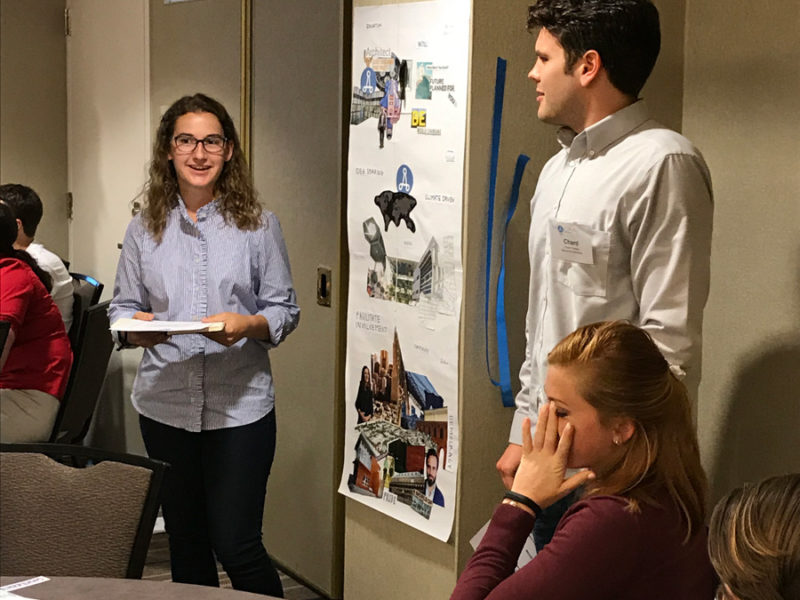 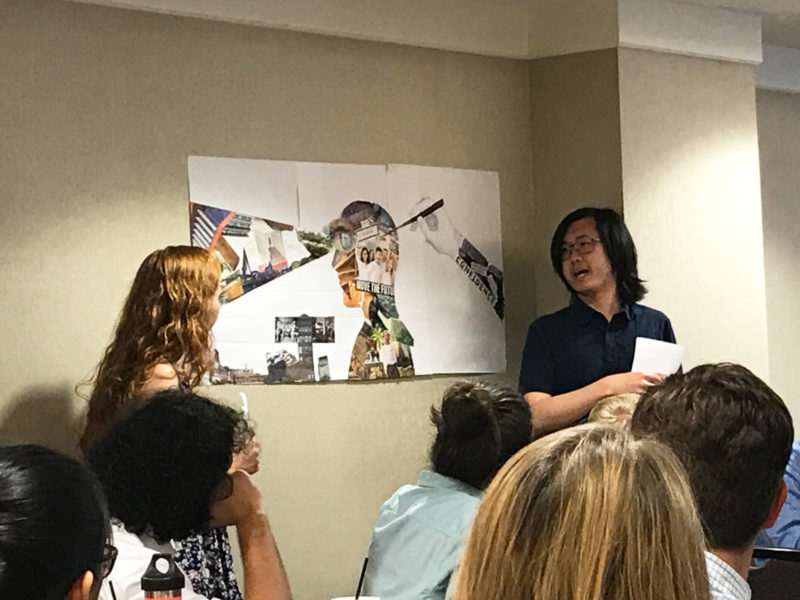 Such thoughtful visioning could not happen at a larger conference like Grassroots or FORUM. Sarah explained that the group was intentionally kept small in order to facilitate difficult conversations about the big picture: “Getting this size of group was really empowering for bringing everyone together and getting on the same page.” She elaborated, “I think it’s going to restructure a new way of doing conferences.”

View the publication that documents the planning exercise in which attendees were a part.

Also unprecedented was the partnership with a creative powerhouse like Disney. Disney Imagineering was the ideal host for a conference tasked with writing the next chapter in the history of AIAS. As Sarah Wahlgren noted, “There’s really no better way to talk about [the future of AIAS] than telling stories,” and the Imagineers are the masters of telling stories through place.

For AIAS Imagine, a small group of Imagineers, mostly architects, volunteered their time to organize a weekend of activities to complement the conference’s planning sessions.

Many of the presentations focused on how the Imagineers design places that lead visitors through a narrative. Their main example was Disney Springs, a recently redeveloped town center adjacent to Disney World with an elaborate fictional history. Convincingly depicting this backstory through buildings makes Disney Springs a model for how to apply the techniques used in Disney theme parks to more conventional urban environments.

The story of Disney Springs is told through its historical districts. Each one is supposedly a vestige of a stage in its development. They show the town’s evolution from a sleepy cattle ranching outpost to an industrial hub to a Spanish Revival resort to the site of a World’s Fair. 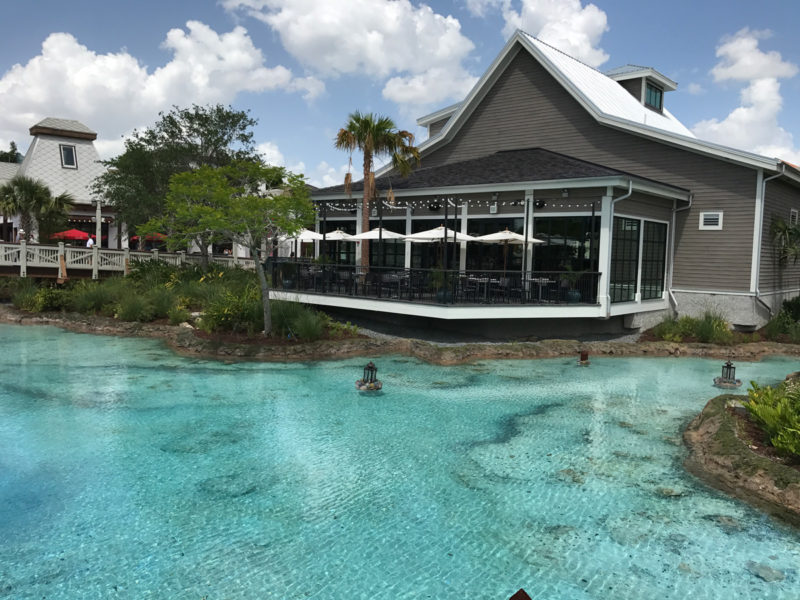 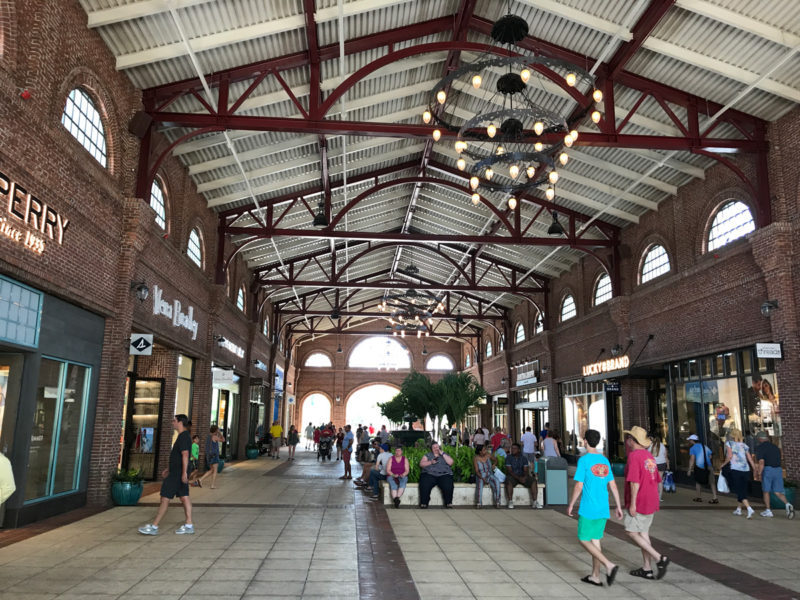 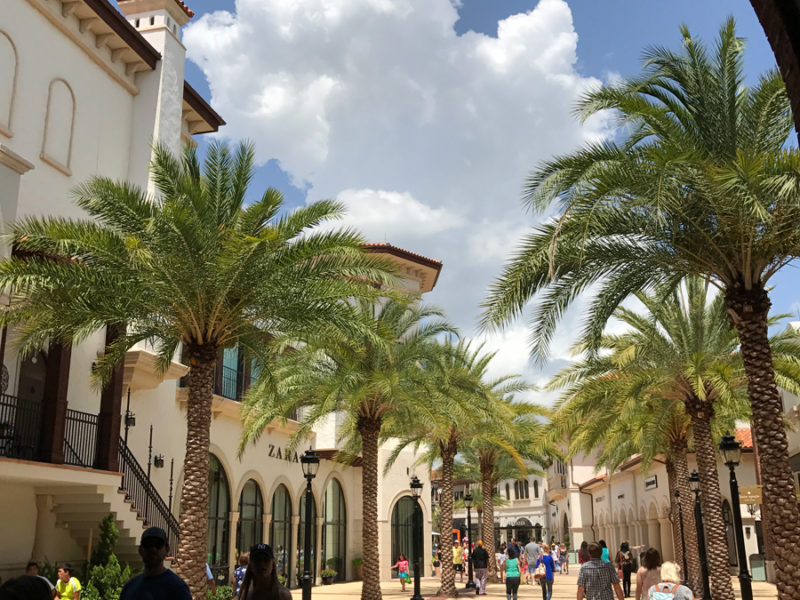 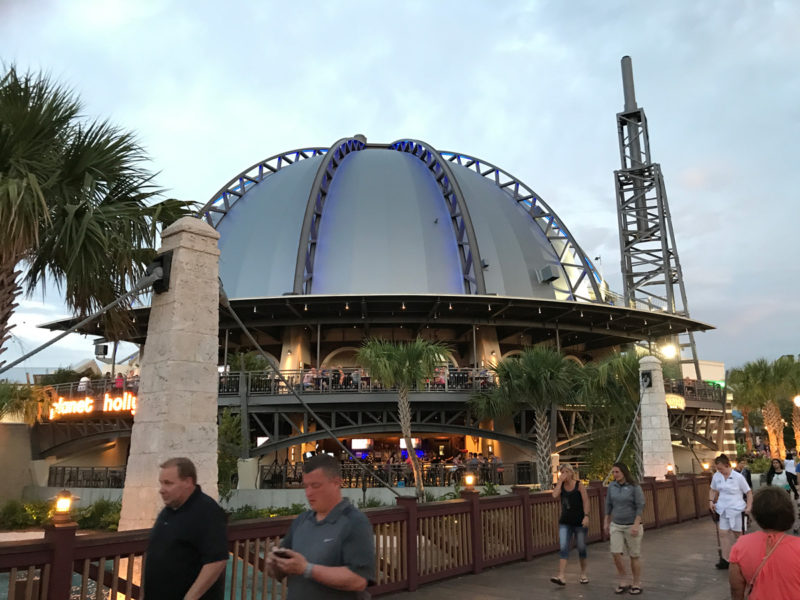 These neighborhoods demonstrate some of the same methods that make the stories of Disney films come to life in the theme parks. For example, they carefully sequence movement, use landmarks to draw people through space, communicate plot elements through visual cues, and maintain a coherent visual message. The results are immersive narratives that help visitors suspend their disbelief and avoid inconsistencies that would wake them from the fantasy.

Constructing these fantasies takes cutting-edge technologies and extensive experimentation with materials. Some of the three-dimensional visualization technologies are so advanced that one presentation speaker said she anticipates their technology moving into different dimensions. However, the details are Top Secret. I could tell you more, but I would have to do like Ursula and take your voice.

Other activities at the conference gave attendees the opportunity to interact with the Imagineers and learn from their process. For example, Imagineers led tours through Disney Springs, explaining design choices. The next day, Imagineers took small groups on sketching expeditions through the town, encouraging attendees to capture the elements that told each district’s story. 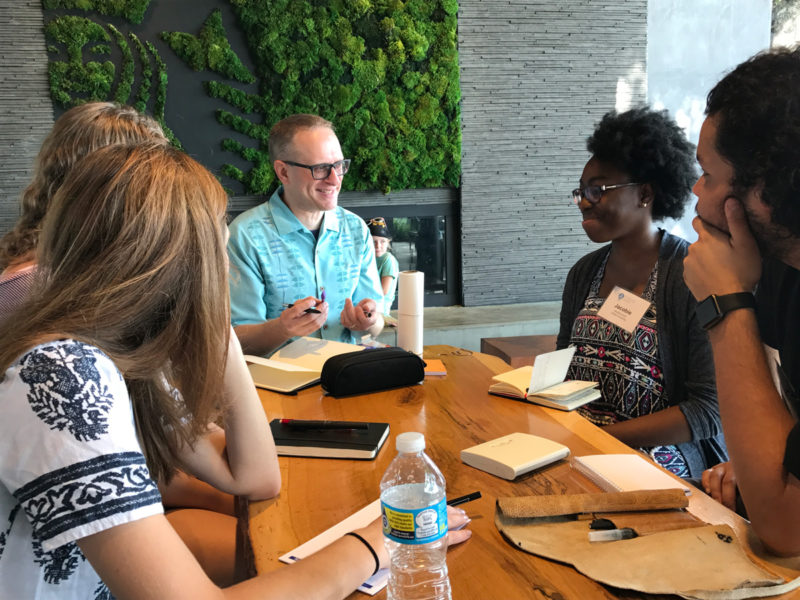 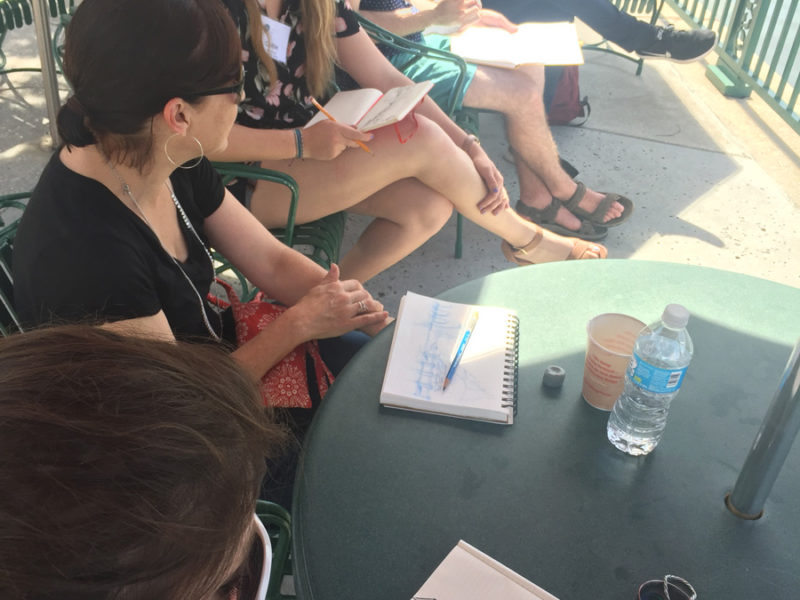 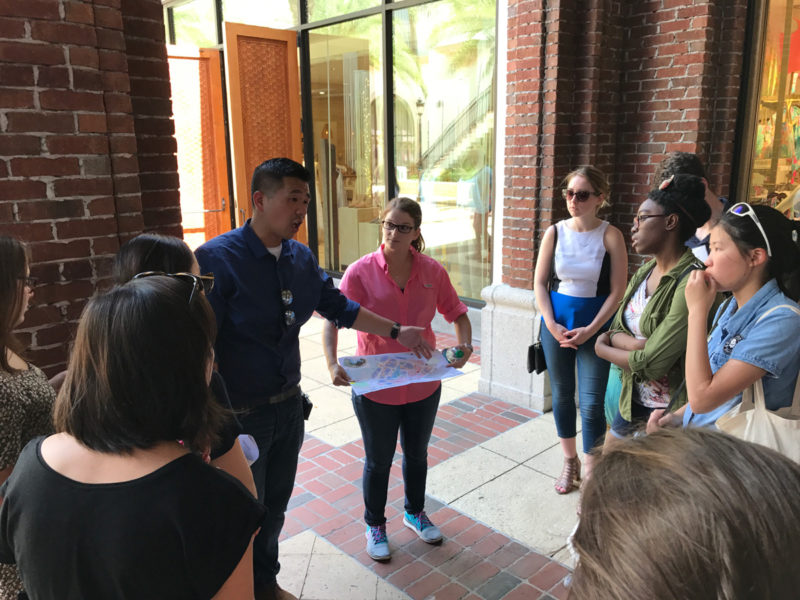 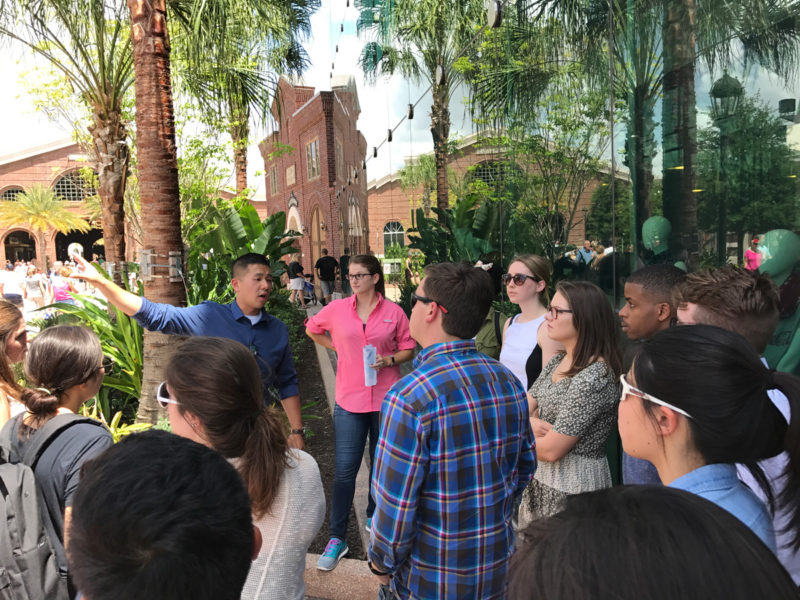 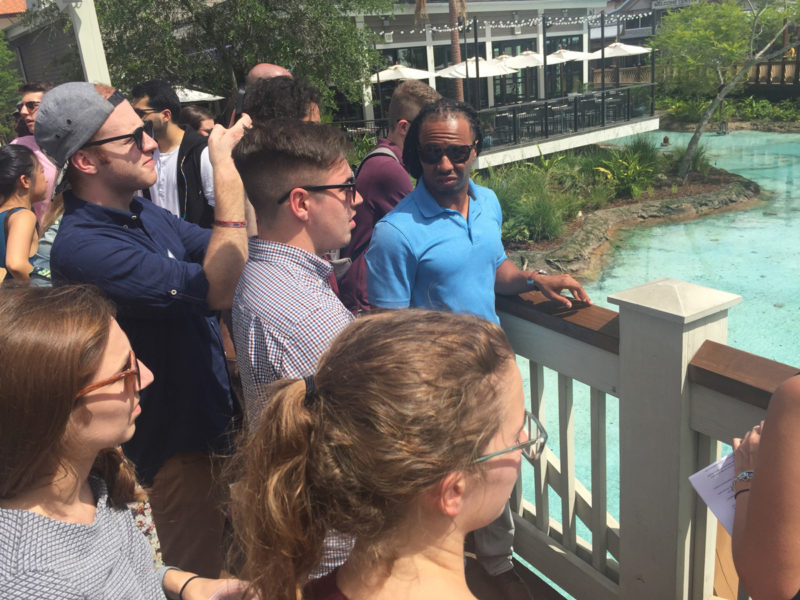 There was also a panel of newer Imagineers who also studied architecture. Since their division includes people in more that 140 disciplines, they were a select group. They explained their roles in the Imagineering division, as well as their career paths to Disney. Interestingly, half of them had become project managers, a testament to the comprehensiveness of architecture education. 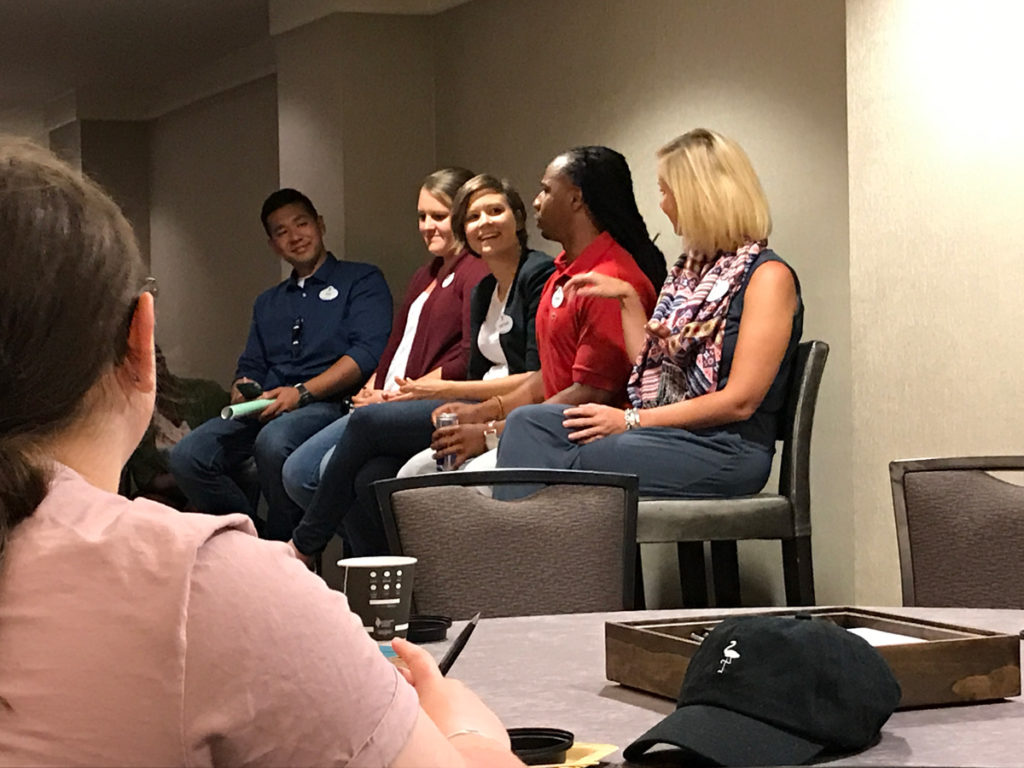 A surprising consensus among the panel was their advice to take the jobs no one wants. Those difficult tasks will reveal themselves to be more interesting than anyone expected. Plus, the skills you learn will give you a niche, thus increasing your value to the company—some practical magic from some professional dreamers.

At every turn, the Imagineers revealed to attendees the secrets of Disney magic. But eventually the clock struck midnight, and it was time to go home.

Encouraged by the success of the weekend at Disney, the leadership of AIAS hopes that the Imagine conference will be a model for future events. They hope to convene regular planning sessions with similarly small groups and to continue co-hosting events with companies on the forefront of innovation and design. Shooting for the moon, vice president of AIAS Rachel Law is aiming for the next conference to be at NASA. After all, AIAS was formerly known as NASA: the National Architectural Student Association.

Rachel’s high hopes for projecting AIAS into the stratosphere exemplify the type of visionary thinking fostered at the conference. If the Imagine conference with Disney showed us anything, it was the world you can create when you wish upon a star.