Auburn University’s AIAS Freedom by Design (FBD) Director 2014-15 William Gaskill participated in Rural Studio. Gaskill said while the FBD and Rural Studio programs have never worked in partnership, they both run off the design build model using students as their catalysts. 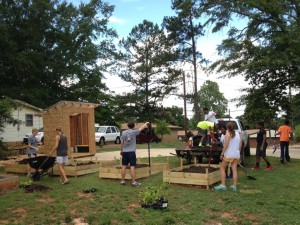 The Freedom by Design team at Auburn University collaborated with the nonprofit Our House to create raised garden beds. Credit: William Gaskill

Rural Studio’s staff was on hand for advice for certain aspects of the project. “It greatly helped us more specifically in the design and construction of the Raised Garden Beds for Our House, a nonprofit in Auburn, AL,” said William “Rural Studio’s gardener, Eric Ball, provided crucial information about plants, and how to design not only the garden but also what, when, and how different plans would cycle through the garden.”

Saxon Gibbs served as the 2014-15 AIAS fundraising chair and also took part of Rural Studio. She said, “I think attending the Rural Studio as a Third Year has given many students the confidence to seek leadership in the AIAS’s design and build opportunities. Many of the students in my class who have attended Rural Studio have also participated in FBD, and I think both programs have benefited from this.”