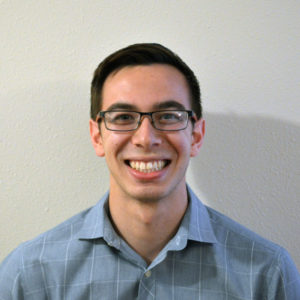 Justin Pagorek is a fifth year student at Iowa State University who has been involved with his local chapter since his sophomore year. He has served as Vice President and is currently President of his chapter. At the regional and national levels, Justin has attended five conferences and served on the national membership committee.

Past Midwest Quad Director Danielle Jones said Justin “has a passion for helping the community and continually finding ways to strengthen his leadership as well as those around him.”

Nicole Becker was Chapter President during Justin’s term as Vice President. “As a chapter leader, Justin is confident and dedicated to the AIAS. He works to advocate for the organization and will stand up for what he believes in,” said Nicole.

Outside of AIAS, Justin has a passion for traveling and learning from other cultures. He studied abroad in Rome last semester and travelled to Rwanda for studio last November.

Justin says the national leadership in AIAS inspired him to stick with the organization and push himself towards new opportunities. One of the most influential moments for him was when Past President Danielle Mitchell gave her acceptance speech during the 2014 AIAS Forum and said that when we lose the feeling of butterflies in our stomachs, we need to take the next step and continue to push ourselves. Justin also believes that we, as both individuals and as an organization, need to strive for that feeling of butterflies to continue to grow.

After graduation Justin plans to move out of the Midwest and begin working. His ideal firm would do a wide range of work as well as non-profit design, cultural projects, research and small scale installations.