AIAS > News > Advocacy > CHANGE-MAKING: How to Tell Your Climate Story 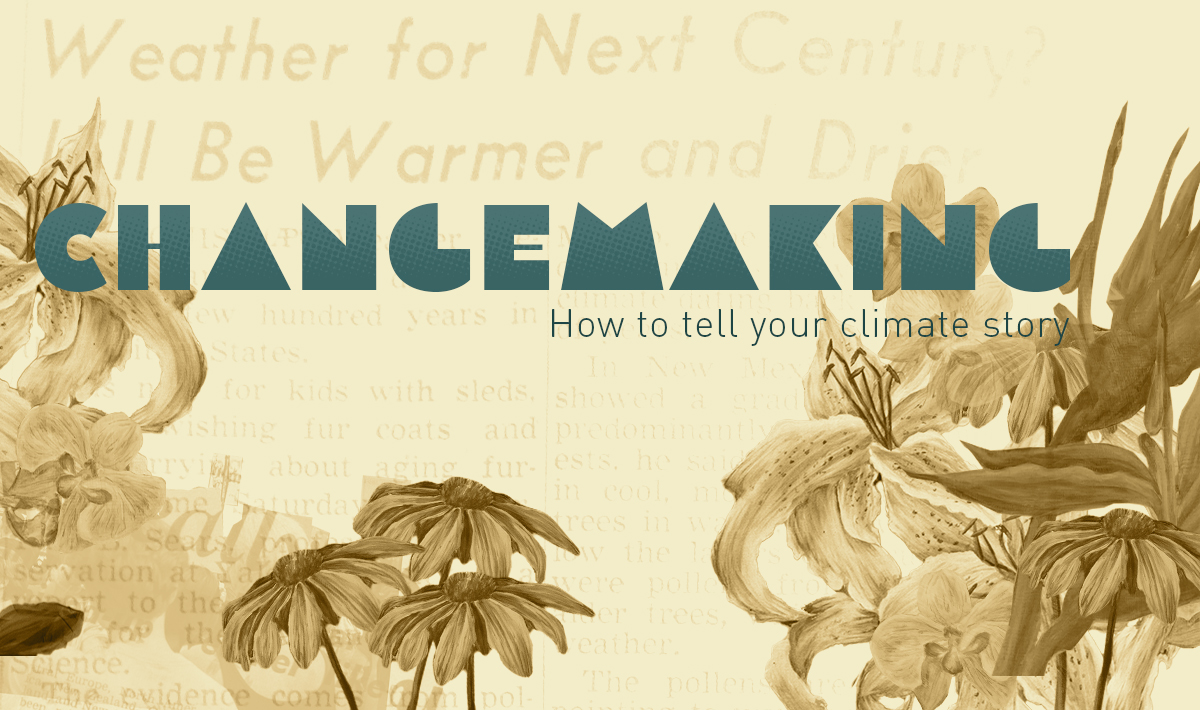 I remember in elementary school when we were learning about the different types of writing and one of them being persuasive. Of course at that time we were writing prompts that were pretty silly like “how can you persuade your parents to buy you a new toy?” These little exercises were obviously meant for some fun activity for us 3rd graders, but the same principles of a child wanting a new toy can be applied to talking about climate. Stories are such a critical part in conversation as they begin to open ourselves up to a vulnerable and intimate place. And the same goes for how we listen to stories. We start to shift into a cognitive and less critical way of thinking and processing information. I think we have all heard the harsh truth of climate change in these morbid documentaries narrated by men with deep, monotone voices. These are of value to people that acknowledge climate change. Yet, for someone that doesn’t respond as well to factual information, we have to connect on a more personal matter. Like how we can relate to social issues, familial ones, local issues. We need to convey information beyond just the facts.

I often find climate narratives to be fairly daunting and intimidating for the simple fact that climate change is pretty spooky. The main steps to telling a climate story start with knowing your audience and say something to relate back to them. I remember when I was lobbying my senator about a climate change policy, he said something along the lines of, “When I was younger, my dad used to take me to parks. Now, all the parks are gone!” I didn’t realize we were employing the technique of knowing his audience then, but at the time, I was like, “I love parks too!” In this situation, he knew that we were talking to him about climate change and he showed us that he was attentive by revealing part of his story. It’s nice to experience someone open up about how they’ve experienced climate change, even in the smallest ways. After we met with my senator, my team could not stop talking about how a Republican senator from Indiana was telling his climate story. In talking to your audience, this could be mentioning marginalized groups if speaking to them, a local community, some demographic. Really just something that speaks to a person’s identity.

The next step in telling a climate story is bringing something new to the table. Our stories, in part, have already happened. So how can we begin to talk about our future? This could be with a policy change, new implementation, a small change. If I were talking to my parents, for instance, I would bring in examples of how to upgrade our home to be more green and energy efficient. Most of the times when I have told a climate story, I have been in the setting of a city official or learning how to talk to one. In my case, that involves talking about Citizens’ Climate Lobby and H.R. 763. But, policy change can take the form in many ways depending on the official. This past semester, I was talking to the president of my college to support the idea of a carbon fee. So an indirect policy change.

The final step to telling a rocking climate story is imbuing it with passion and emotion. I know that this can be a struggle given that not everyone has experienced drastic effects of climate change. Yet, it has impacted us all in some way.  At the past Citizens’ Climate Lobby conference I was at, someone brought up an encounter they had skiing. The person she was chatting with considered herself a climate refugee because she needed to relocate to be able to ski and do winter sports in her home state. While I don’t necessarily appreciate the term climate refugee in this scenario, she is aware of climate change. In her defense, this is part of her climate story. Here’s an example of how I would tell my climate story if I were calling my representative:

“Good afternoon Senator Braun! I’m Moid Ali, a college student from Indianapolis, and I would like to take a little bit of your time to talk about climate change. I would first like to thank you for the work you have done with starting the climate caucus in the senate. It means a lot from Indiana starting this initiative. I know growing up in the state, I have definitely seen how climate change has begun to affect our state. I remember watching the cornfields across grow each summer and experiencing the whole process. But as the years went by, the corn season started later and later as the spring showers prolonged. Eventually, no more corn grew across the street as the fields became flooded. It’s sad to see Hoosiers lose their jobs because of climate change and we have to do something to counter it. I’m calling you today to talk about H.R. 763 which is the Energy Innovation and Carbon Dividend Act. This bill is proposed in the house and will hopefully make its way to the senate. I encourage you to support this legislation as it will help mitigate the effects of climate change and give back to American citizens. Thank you for taking the time to hear about climate change and I look forward to hearing back from you!”

Some things to think about included to start you climate story are your name and where your from, what places have you seen affected by climate change, what’s your response to climate change, how has your family and community responded, what was the moment you realized climate change was a big issue, what do you see happening in the future. These are just some starting points for your climate story to spark some inspiration. Storytelling is such a powerful tool for part of the solution for mitigating climate change and needs to be utilized more so that we can band together and make change happen now. I encourage you all to craft a climate story and maybe talk to your family over the holidays, call or email your representatives or state officials, or even post it on social media for all to see. I’d love to hear everyone’s climate story so feel free to shoot me a message on Slack, send me an email (mali47@hawk.iit.edu), or even dm me on Instagram (@_moidali) with your climate story!