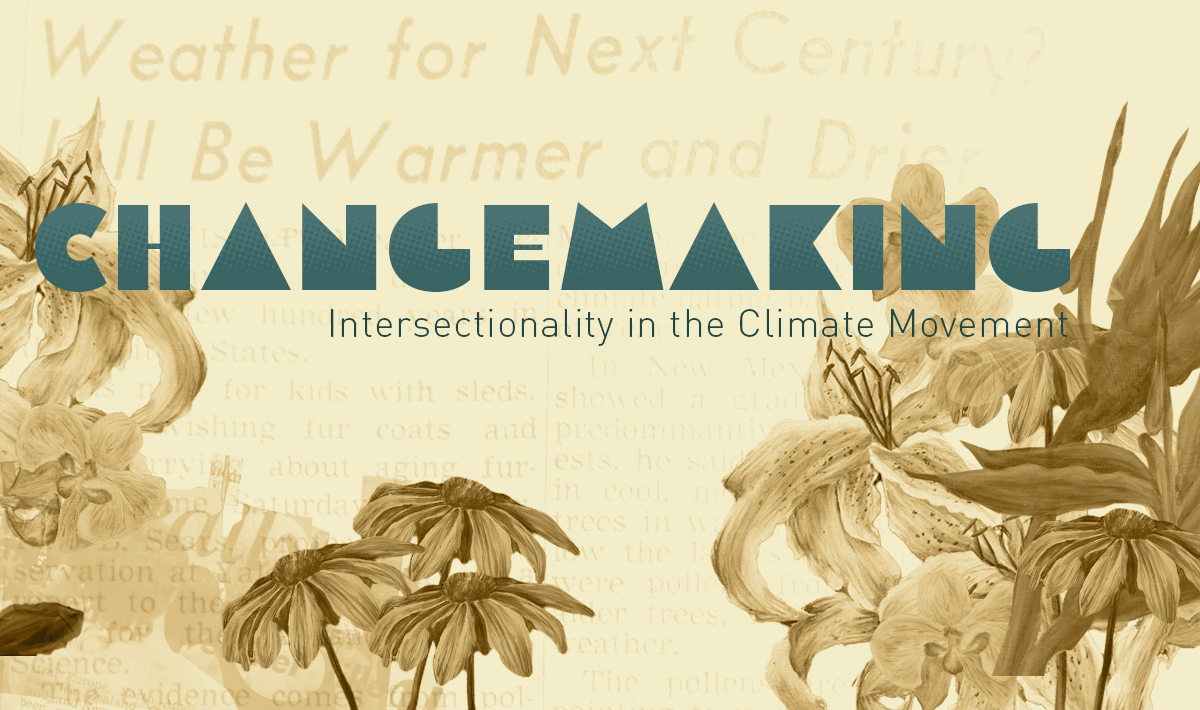 The climate movement is multifaceted, a complex polyhedra of sorts. With each factor coming together to form a greater problem. If one piece of the 3d object is removed, others start to deter in progression.  Intersectionality is a term coined by Kimberlé Crenshaw, a professor at the Columbia Law School,  in her 1989 paper “Demarginalizing the Intersection of Race and Sex.” Intersectionality is a way of understanding the connective tissue, a framework, between gender, race, class, and other such backgrounds. The term started as a way to understand the injustice of the courts system and how it discriminated against different groups. A way to see nuanced shades of gray in a black and white world. This is to understand how a variety of social justice and human rights activities are impacting peoples. In a world filled with single action items, intersectionality defines how each one interacts with one another and the root cause is all the same. From women’s rights, social justice, poverty, to climate change, these all derive from the same societal disruptions. To name a few, capitalism, privilege, patriarchy, colonialism.

The solution to climate change does not end with big business stopping CO2 production, but ends with forging justice for groups that have faced disparities from climate change. We have to be like Orpheus and Eurydice, but overcome the curse, look forward until we have reached the sun. Climate justice must take into account the social implications and repercussions of climate change. The people that have suffered the most from climate change are marginalized groups that have faced tragedy and been displaced. While pure environmentalism focuses on the need for protecting the environment, change starts with the confrontations of the economic systems in tandem with climate. The economic choices are the issues driving the majority of the problems happening globally. In the media, environmentalism is portrayed as having ties and stopping pollutants, confronting weight, and political action to save the land. While these fronts are all noble endeavors, there needs to be a greater acknowledgement, the reveal of a hidden truth, a shift in ideology, to understand that the struggle, the struggle faced by countless many is all connected. One of the things that first striked me about environmentalism was how privileged it seemed. When I got to high school and people were more socially, politically, and eco-conscious. There was a push for reusable water bottles, metal straws, and other such ‘eco’ products as well as almost a shaming for not converting. The problem with this is the privilege involved. The point of analogy is that the climate movement has to encompass more than just the people able to afford change. As ideal as life would be to become a transcendentalist and wallow away at Walden Pond, like Henry David Thoreau, we have to understand that not everyone has the ability to do so. The thing I saw as so liberating and eye opening when I attended the climate strike in Fall 2020 was the unity of everyone there under a common goal. Gender, race, age, identity did not separate anyone there from doing the impossible: banding together to convince the world to stop climate change.

The fact of the day is that climate change affects everyone differently, from the farmers of the crop filled Midwest, the sea born Northeast, the sun baked south, to the vast west. Each place, each region, each person reacts and experiences the inequality of climate change. Some will experience it harder than others. Climate change and social justice are linked, hand in hand, Romeo and Juliet. Destined to be with each other against all odds or die trying to battle all the parties trying to pry their hands apart. Socioeconomic status, gender, race, disability, status, are all key in understanding and considering for change, politically and socially. The subliminal and nuanced nature of injustice has to be addressed and acknowledged to have an almost rebranding of sorts in order to further the initiatives of environmentalism and keep intersectionality in mind.

Please send me thoughts on where you see the climate movement going, how you fit in the puzzle, or anything else, climate related or not. Feel free to shoot me a message on Slack, send me an email (mali47@hawk.iit.edu), or even dm me on Instagram (@_moidali)!

Some additional resources to check out:

Learning about intersectionality and climate change

Q&A With Lauren Ritchie on Intersectionality in the Climate Movement