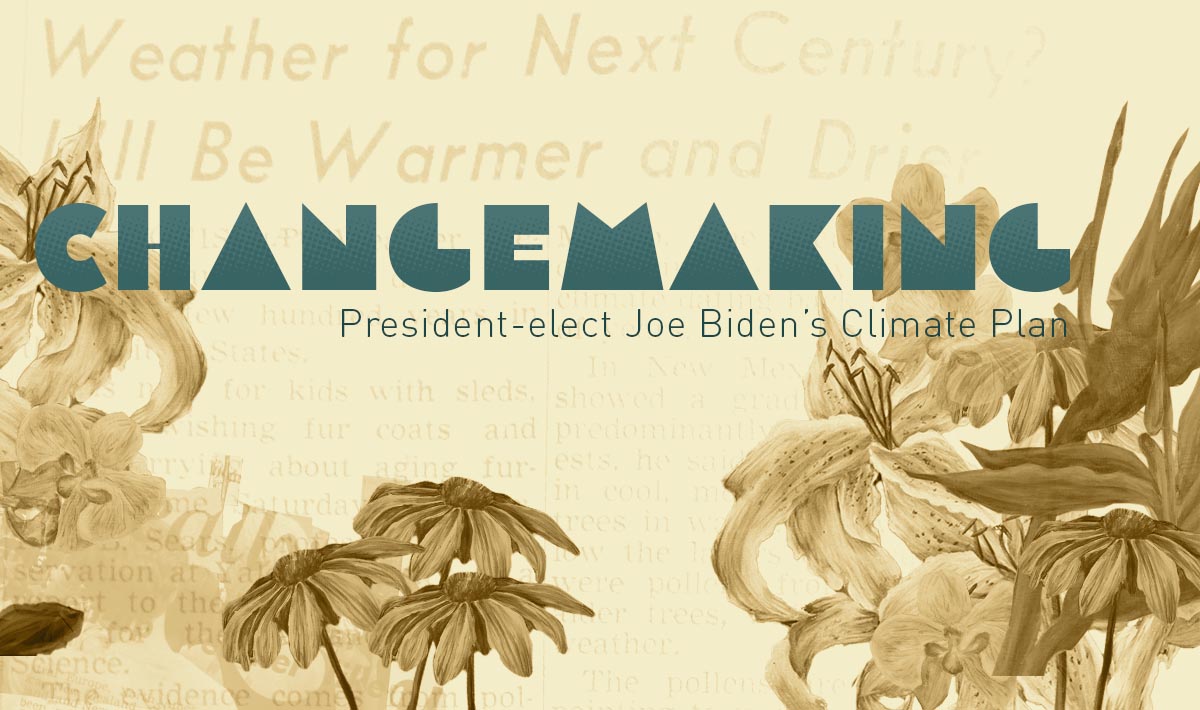 After days of stressing out and constantly refreshing my Twitter feed to see any updates on the election, Joe Biden has successfully been named President-elect of the United States. But what does this mean for the environment? Joe Biden and his running mate, Kamala Harris, briefly touched on their plans during the Presidential debates, yet most of what I gathered was, to quote Biden, “The Green New Deal is not my plan.” So what is it?

Before I dive deep into the plan, a lot of the work laid out by Biden is through executive orders to begin and then layout the groundwork through a $2 trillion climate plan that will make the United States have a 100 percent clean energy economy and have net-zero emissions by 2050. All of this information is published on Joe Biden’s campaign website, but this post is a summary of the main takeaways. In one of Biden’s webpages, he outlines the nine key points to his plan and I will be focusing on those nine points and adding some more information from some other sources as well.

The first and most important era in a president’s time in office is the first 100 days. Biden has many plans to employ executive orders and part of these are to combat climate change. The following points will be a direct result of the executive orders.

I’m sure as architecture students we are all aware of the AIA 2030 Challenge. For those unaware, it is a framework for U.S. firms to have all construction be carbon neutral by 2030. Biden’s plan is at a much slower pace. I’m assuming this is due to some climate reports that came to the conclusion that 2050 is the latest for the action to happen. His plan is definitely a stretch from where we need to be, but it is some acknowledgement. To achieve this goal, Biden plans to use the Federal government procurement system to invest its time and money on 100% clean energy and zero-emission vehicles. This is when an agency addresses the goods and services needed and goes about the most effective way of acquiring them. Another related part of the plan involves adjusting what kind of fuel is used and shifting focus to alternatives like biofuels. Also, investing time into researching other vehicles like planes and submarines. Also relating to this, he will maintain and enforce the Clean Air Act as well and reduce emissions from transportation.

Other ways Biden plans to get to net zero by 2050 are protecting natural areas and conserve 30% of America’s land and water by 2030 and protecting wildlife. He also wants all federal action to consider climate change and require companies to disclose all emissions produced in their business.

III. Convince the rest of the world comply with climate change

This bullet point is definitely one of the harder goals to achieve. To start Biden plans to recommit to the Paris Agreement. The Paris Agreement is an agreement signed by the majority of the world’s countries in which they agree to reduce greenhouse gas emissions so that the globe’s temperature won’t continue to rise. The agreement was signed in 2016 and President Donald Trump left in 2017. Biden also plans to convince other nations to expedite their climate plans.

IV.  Investment in research and technology

These two points from Biden’s plan are fairly similar with goals overlapping and relating back to one another. To start this initiative, Biden plans to invest $400 billion over the next five years to target a few initiatives. Here are a few areas that will be invested in:

V. Make environmental justice a priority across all federal agencies

This is not fully explained in his plan, but definitely needs to happen. I think a major way to see this through is by looking at who Biden assembles for his Cabinet and what happens in the first 100 days

This is in part achieved through requiring methane pollution limits for oil and gas operations, but it is not fully explained in his plan.

This is a fairly large part of Biden’s plan as president in general and has to do with many of the other policies Biden plans to introduce. Part of this is to create low-carbon manufacturing in each state and create jobs in that sector. By creating new technologies, through investing in research and technology, Biden’s hope is that the new technology will create new jobs due to the U.S. adhering to new energy guidelines.

Another big part of Biden’s plan in general as president is to solve these problems (much of which are formed by climate change.) For instance, he wants to ensure that places like Flint, Michigan to Harlan, Kentucky to the New Hampshire Seacoast have access to clean, safe drinking water. Another part of this is to make low-income housing more efficient

After researching Biden’s Climate Plan, I am not entirely sure on how some parts of the plan will be executed, enforced, and monitored after Biden leaves office. A lot of the plan is pretty lofty and admirable plans which I can only hope are followed through with. Most of the points Biden states are goals, but the action needed to attain them is not quite clear yet. However, I am excited to see how this plan plays out following the inauguration. You can catch me checking Twitter and news updates during the first 100 days of Biden’s presidency to see what new updates have happened.

I would love to hear everyone’s thoughts on the new political world we are entering and what you think of Joe Biden’s climate plan.  So feel free to shoot me a message on Slack, send me an email (mali47@hawk.iit.edu), or even dm me on Instagram (@_moidali). Also, let me know what you want to learn more about in terms of environmentalism! I’d love to explore some cool topics that people want to see brought to light.

Some additional resources for your fancy that elaborate on Biden’s plan:

joebiden.com “The Biden Plan for a Clean Energy Revolution and Environmental Justice”

Some climate related content to listen to as you study for finals and wrap up late nights working in studio:

“Scare Away the Dark”– Passenger