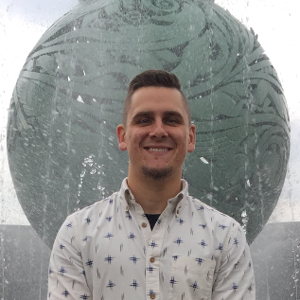 Devon Zurcher is in his fourth year of his Bachelor’s of Science in Architecture and Environmental Design at Bowling Green State University (BGSU) and currently serves as the AIAS Chapter President. He has been an active member of AIAS BGSU since his freshman year. Before his election as the Chapter President, he served as the freshman representative and was Vice President his sophomore and junior year.

Devon said he has worked with the most highly motivated, passionate, and intelligent people throughout his years serving BGSU AIAS.  “I cannot thank my executive board enough for where we have ended up. They bought into my plans and have exceeded all expectations which is a credit to their hard work and devotion to this program.”

He said after his team was elected they set out to increase our membership by 100%, “which we initially thought was outrageous, but with the executive board I have, we hit a 156% increase within the first few months. I would not be winning this award without them.”

Alex Schrinel serves as the chapter’s Vice President. He said he admires Devon’s selflessness and effort. “This year he went above and beyond his duties as president so that future classes would benefit. Not only has he gone above and beyond, but he has also created a sense of community within Architecture at BGSU that really wasn’t there before, and I think if you asked anyone else they would say the same.”

Throughout his years on the BGSU AIAS executive board, Devon has helped the chapter focus on developing student’s designs, graphics, presentations, and portfolios as well as aggressively networking to promote Bowling Green State University Architecture. “We have implemented a new program we call, “Create.” that focuses on projects in the liberal arts as well as architecture and urban development,” said Devon. He credits the program to an increase in membership and a better overall interaction among all years within studios. The chapter continues to improve the program and hopes to see it on a national stage one day.

Midwest Quad Director Jeremy Gentile said he’s excited Devon is being recognized. “Bowling Green State has seen incredible progress this year, and it is because of his leadership that program offerings have diversified and membership has grown,” Jeremy said. “His dedication to the organization at multiple levels, including Design Think Tank, is incredibly encouraging.”

The Design Think Tank is a special committee responsible for investigating and enhancing the relationship between AIAS and design in schools of architecture, highlighting how the AIAS can become a venue for leaders in design.

Maria Hurtado serves as the chair for the special committee. “Devon has been extremely dedicated to the Design Think Tank, continuously contributing and helping us move forward. He has been essential to the ideas that the think tank has come up with,” said Maria.

Devon recently finished an internship in Cleveland, Ohio working for Sandvick Architects, and he looks forward to working there again this summer. He currently works as a Structures and Math tutor for BGSU. On top of tutoring, AIAS, and balancing studio, Devon is also in the process of applying to graduate schools to further his knowledge in the architectural field.