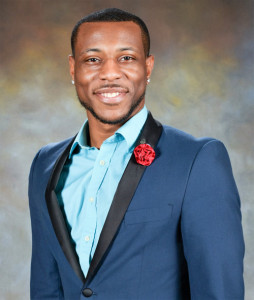 Ricardo de Jesús Maga Rojas is a second year Master of Urban Planning student at Texas A&M University (TAMU) where he serves as the AIAS Chapter President. As an Afro-Cuban aspiring architect, Ricardo has dedicated himself to becoming an advocate for minority and low-income communities and mentoring students with respect to licensure and integrating different interests outside of architecture. During his presidency Ricardo has teamed up with various student organizations.

“In the architecture profession, we collaborate with other disciplines and I wanted to bring that to the TAMU AIAS chapter,” said Ricardo.

This past November, the chapter partnered with the Association of Student Planners (ASP) for an Alternate Paths to Licensure lecture. There were three panelists, including an urban designer/planner sponsored by ASP from Gensler who provided insight on alternate paths within the architecture profession.

“He sees the big picture with regard to integrating architecture with other disciplines such as urban planning, civil engineering, landscape architecture, etc,” said Tiffany Cousins, president of the university’s ASP.

“I am of the opinion that if we want to create a better world, than we need to work together as friends and colleagues, because we need input from each other to do so,” said Ricardo.

South Quad Director Sarah Wahlgren said Ricardo is a true asset to the AIAS. “He has outstanding energy and a great influence for the chapter and entire South Quad. He has been empowering and reaching out to chapters within the Quad and challenges me to work my hardest,” said Sarah.

Ricardo balances school and his leadership role with the AIAS while working part-time as an Architectural Intern at Patterson Architects in Bryan, TX. Prior to attending Texas A&M, Ricardo graduated from Tuskegee University’s Robert R. Taylor School of Architecture and Construction Sciences (TSACS) in 2013. Previously, Ricardo was employed as a summer architectural intern at Pierce Goodwin Alexander and Linville (PGAL), a Houston based architecture firm that provides architectural, engineering, design-build, program management and interior architectural services to private and public sector clients in the United States and Mexico.

Currently, Ricardo is working towards becoming a licensed architect and a LEED accredited professional. Ricardo is extremely grateful for the student leadership at his chapter and advises his fellow students that “if you have a passion for something, get involved with that cause and do not sit stagnant.”

You can nominate an outstanding AIAS member for Chapter Leader of the Month at www.aias.org/nominatechapterleader.