Close to 600 students and leaders of architecture and design from across North America gathered in San Francisco for the AIAS FORUM 2015. The conference, held December 29, 2015 to January 1, 2016, is the largest annual gathering of architecture students in the world.

Four firms based in San Francisco opened their doors to 160 students for firm crawls. The firms spoke about the work they were doing, their office culture, and what it’s like to work in San Francisco. The students were able to ask questions and see various types of firm cultures throughout the course of the day. The firms they toured were:

In various meetings with chapter leaders, the AIAS Board of Directors presented on the current state of the organization, discussed matters of importance to the organization and entertained motions from chapters. AIAS President Danielle Mitchell also moderated a collateral leadership panel. The Council of Presidents voted upon the new board.

Annually at AIAS FORUM, chapter leaders are called upon to elect the new incoming board of directors for the organization. This year’s Call for Candidates saw a remarkable number of members stepping up to take on these leadership positions. For the elections during AIAS FORUM 2015 each open position had at least two candidates; one race had up to six candidates. Read the article 2016-2017 AIAS Board of Directors Elected at AIAS FORUM 2015 for the election results.

More than 40 exhibitors including schools and firms from across the nation reached out to attendees during the College + Career Expo sponsored by NCARB’s Architect Licensing Advisors Community. Students were able to speak with school and firm representatives one-on-one. 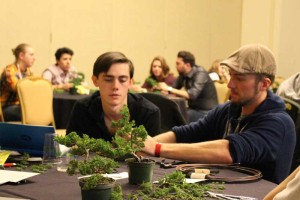 Throughout of the course of the 4-day conference, attendees had the choice of 20 educational sessions. Topics ranged firm profiles, architypes, Freedom by Design, career sessions, portfolio reviews and more.

AIAS FORUM participants were able to explore San Francisco through twelve tours, including walking tours of the city and popular destinations like Chinatown, the Golden Gate Bridge, Alcatraz, the California Academy of Sciences and the de Young museum.

FORUM After Dark was a way to continue the fun after the daily events. The first event, the Honors & Awards Reception, celebrated the extraordinary achievements of fellow AIAS members at the nearby Children’s Creativity Museum. The following night took attendees off campus to the restaurants and bars of San Francisco’s Mission District for Quad Crawls. Attendees rung in the new year at the Beaux Arts Ball, which was themed as the AIAS’ take on Burning Man. The closing night party ended quietly, but with the popular silent disco.

The AIAS would like to extend a thank you all of our sponsors.