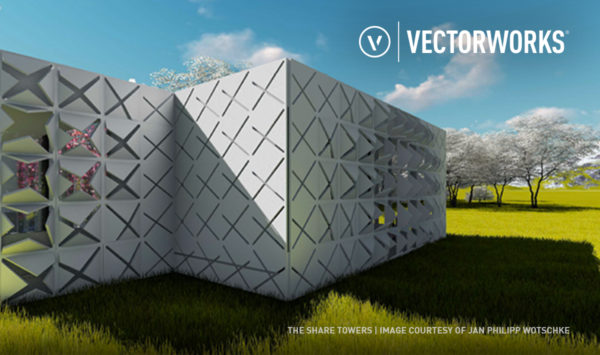 In the 2017 summer semester, students of the Detmold School of Architecture and Interior Architecture developed an exciting project involving sunscreen possibilities for a building façade. The result is five designs created with Marionette, the built-in algorithmic modeling tool for Vectorworks.

Teams totaling 240 students designed 16 high-rise buildings using Project Sharing, the multiuser environment in Vectorworks. No matter where they were located, the students could share their ideas and 3D models in real time, creating a direct network of all project partners involved in the planning and implementation process.

The project was part of a course titled “Networked Design,” which was taught by Markus Graf, architect and research associate of Prof. Hans Sachs, along with tutors Pascal Völz and Marius Hagen. The students were each given two floors of towers and were assigned to complement them creatively using parametric models.

Nico Günnewich presented a design where the light transmission can be controlled by power through the use of switching glass, which is divided into a small, individually controllable grid. If the glass is energized, it is transparent; if the circuit is interrupted, the glass turns milky. 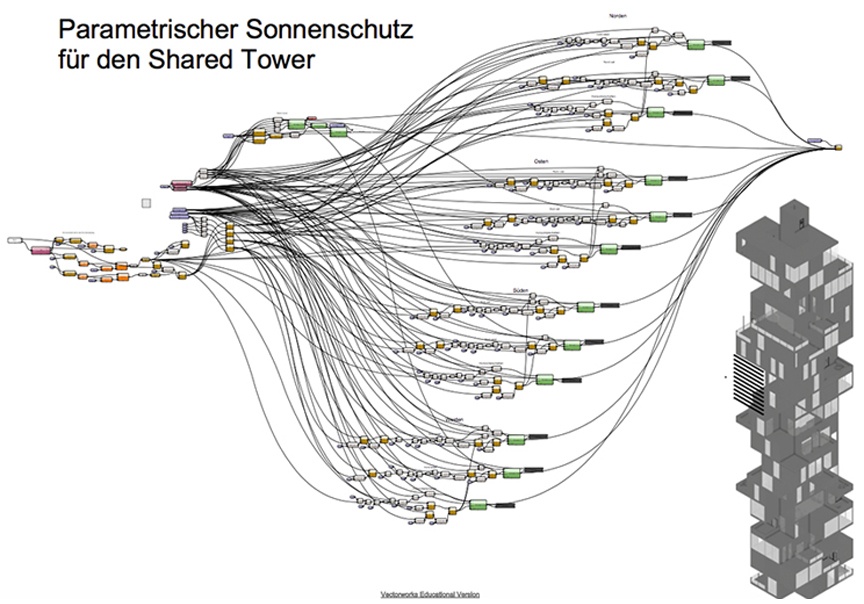 Kea Stockbrügger presented a design with small panels attached to the building façade. The panels can be opened or closed to regulate the sun.

Niemann and Pytlik created a design in which the influence of light is controlled by special shutters. Depending on the position of the sun, the individually curved, hinged modules rotate to provide optimum protection from the sun.

Wotschke’s design included square panels that can open and close, similar to a blossom. The individual squares can be individually controlled and thus adapt to different irradiation angles.

In Hengstenberg’s approach, each window has two triangular rolled sails. Using a motor-driven chain, the opening state of the sail can be regulated, allowing an individual pattern on the building façade to be created.

The overarching goal was to give a new creative effect to the building envelope using Vectorworks and Marionette as the central tools, and we believe it was a success.

If you are interested in algorithmic modeling, try out Marionette after you download your free Vectorworks student license.